I will be spending the end of June in Springfield Ohio teaching a residency for Project Jericho. I also completed the writing and casting process for an original web series based on my book, shooting in July. You can donate to the project here.

I have appeared with the Mayhem Poets on the TODAY SHOW, EYEWITNESS NEWS, PLUM TV and  the “Alternate Routes” campaign for FIAT. I’ve been featured solo in commercials for AXE HAIR, SNICKERS, TIME WARNER CABLE, PINNACLE MEDICAL BILLING, SPREAD THE JAM speakers. and CW-X sports wear, a tourism video for the GREAT VALUE VACATIONS and a handful of shorts and features. Some of my favorite roles onstage have been BENEDICK in Much Ado About Nothing, SIR TOBY BELCH in Twelfth Night, GEORGE HAY in Moon Over Buffalo, SWIFT in Words, Words, Words, HENRY HARRY in Brilliant Traces, POP in Snap, Crackle Pop, 3 VERSIONs of SCOTT in Masque, IRA STONE in Laughter on the 23rd Floor, ROY in Buried and MAX in Bent. I am always looking to collaborate with other actors/directors/dancers/poets/stilt walkers/magicians and more. scotttraven@gmail.com

Current and Past Projects:

Performed for 10,000 ten-year olds as part of the Schuster Theater’s 10th Anniversary Celebration in Dayton Ohio.

I won the LULU Blog Valentines Day Sonnet Contest. To read the winning sonnet and other entries click and scroll down here.

Scottt Raven releases Sconnettts 50 Shakespearean Sonnets in print and as an Ebook on Amazon to some pretty good reviews. “Complex, Literary, Full of Puzzles. Four Stars.”

Myself and the Mayhem Poets served as Artists in Residence in the Caribbean. We performed and conducted workshops at the Carol Morgan School in the Dominican Republic! A wonderful experience. Read an article here in Espanol.

Appeared in an interactive Holiday Card for the award winning agency Cohn & Wolfe. Check the video out here!

Selected to Showcase at NACA Central Showcase in Texas

Appeared in a commercial for Spread The Jam speakers thru Paladino Casting, produced by Black Hand Cinema (pictures and video clips coming soon).

Great shows at BAM and NJPAC with Tap Dancer and Violinist.

S.W.A.P. Encore Show as part of the Poetic License festival at the Wild Project in the lower east side.

Appeared in three performances of S.W.A.P. the year in review from a poet’s point of view at the legendary Nuyorican Poets Cafe

Myself and the Mayhem Poets will be featured in FIAT’s “Alternate Routes” campaign on all CBS radio affiliates and http://www.facebook.com/FiatUsa.

Appearing in a piece for the new Americans Elect Campaign in an effort to “pick a president, not a party”. 1

Just booked an infomercial through TriStar Studios for a travelling tourism company shooting mid-September in Dublin Ireland! Very excited for this wonderful opportunity!

Just found out I will be “The Runner”, modeling the new line of CW-X sports apparel thru an awesome agency known simply as Walrus. Video clips and pics will be appearing on Runners World for the duration of October. Still photos are here.

WE NEED A PLACE

The WHITE GUY on PLUM TV

BURIED at the Looking Glass Theater 2009 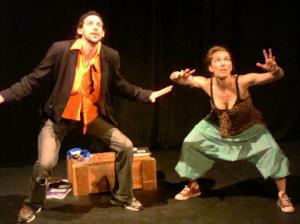 “New Street Poets is the rarest of rare shows. A spoken word play written and performed by six different poets who can also act, it addresses a familiar issue with amazingly new voices. The language was so alive that I clung to its every word, and a great deal of it stayed with me after the show was over. This is a play that any theatre or poetry lover should rush to see.”

“Scott Tarazevits’s Spot is slick and adorable at the same time.”

LAUGHTER on the 23rd FLOOR at the Cabaret Theater

“The individual performances also boasted some striking talent. Most notable of the bunch was Scott Tarazevits’ hyperactive hypochondriac Ira Stone, whose dynamic physicality almost stole the show. The highlight of Act One was definitely his childish but hysterical funny-name showdown of Jewish versus Irish humor with Doyle.”

MOON OVER BUFFALO with the Livingston Theater Company

NEW STREET at the Crossroads Theater 2006

“The wrecking ballpoint pen must charge at bulldozers, and assure a thinking space we all can afford.”

A line of my poetry in the NYTimes!!!

TRIP A LITTLE FISH at the Cabaret Theater

MASQUE: A POETRY THEATER FUSION EXPERIENCE at the Cabaret Theater

BEYOND THERAPY with the College Avenue Players

MUCH ADO ABOUT NOTHING with the JP Stevens Theater Company