It seems as though 95% of all newspaper/magazine articles written about me and the Mayhem Poets fail to include the proper spelling of my surely stretched surname. Despite careful dictation of this ten letter mouthful of a moniker letter by letter; followed by the obvious yet accommodating acrostic (“T” as in Test tubes “A” as in Arthritis, “R” as in Ringo all the way to “S.” “S” as in Sam, or “S” as in stupid scribbler scribing said statement and still miStaking…despite all of this, no matter what I do, letter number 26 continually pops up in print. 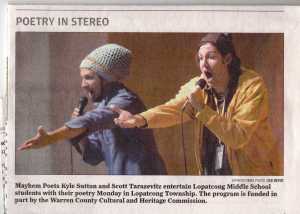 An honest mistake? I guess I could understand this if I’d simply said the name over a bad connection on the phone, the deggod writer happened to be deceptively dyslexic or if I said it so fast that the tail end of my SSSSSSSSSS, somehow resembled the front end of my ZZZZZZZZ. But there have been actual times where I have seen the name written correct in the notebook of a journalist, later to receive a copy of the article with the malapropped mark of Zorro, sadly sitting bezides its unfamiliar T.

Assumption is indeed the mother of all f-ups, not to mention its sister, brother, and surrogate- I realize there is more than one reason for this unfortunate error. So here’s me clearing up a few things, so that in the future we don’t need to go through this.

If you were unaware, yes I am Jewish and given this fact most people assume this: “Oh he’s a Jew, of course his name ends in z, even though he just told me it was an S, oy vell he must have been mistaken.” What?!!!!

Truthfully, a Jewish person’s name will often END in Z, ie., Moskowitz, Rabinowitz, Leibowitz, and Berkowitz- to name a few. The -witz suffix was disparingly given to Jews crossing borders by Prussian and Austrian guards allegedly meaning ‘joke’, but a Z ending does not always connotate a jew. It is also common among spanish speakers and those of Mexican descent- Hernandez, Ramirez, Valdez. Other common Jewish names may include Cohen, Miller and those ending in -berg as in Weinberg, Rosenberg, and Greenberg. Z or not, what most people don’t know is this: My last name (naturally) is taken from my loving father Peter J. Tarazevits. Well, Peter or “Jewish Pete” as he was affectionately called by my gentile friends in grammar school actually is a convert to the Jewish faith. So my surname, “Tarazevits” is not actually a quote unquote Jewish name. Over the years it has evolved from a hybrid of its Russian (Tarazevich “C” as in Change “H” as in Hypocrite) and Polish (Tarasewicz, -wicz a common Polish Christian surname) to its present state of singular supreme ending in “S” existence. So, in short a certain suffix does not neccessarily a jew make and should play no part in its effort to be spelled correctly.

Think of it this way, my entire name (first and last included) is like a poor-man’s palindrome, whereas the first letter of my first name is the same as the last letter of my last name. No?

How about this?
Ask yourself before writing my name this: who is it?
Well, it’s Tarazevits. Actually, that’s a little dumb. A lot of dumb.

Either way, how ever you may arise to your incorrect spelling and whom ever it may be who is to blame; whether it is you kind sir, or you madam, or you mr. photographer, writer, stenographer, scribe, or caped caption crusader, whatever it is you do…please oh please when you encounter me, Scott Raven TarazevitS, son of Mr. Peter J. TarazevitS pleaSe pleaSe with cherrieSSSSSSSS and ScoreSSSS of SkittleSSSSS on top…end with an S.

Posted on January 11, 2011, in T Tease. Bookmark the permalink. Leave a comment.